The didgeridoo is a wind instrument developed by Indigenous Australians of northern Australia potentially within the last 1,500 years and still in widespread use today both in Australia and around the world. It is sometimes described as a natural wooden trumpet or "drone pipe".
There are no reliable sources stating the didgeridoo's exact age. Archaeological studies of rock art in Northern Australia suggest that the people of the Kakadu region of the Northern Territory have been using the didgeridoo for less than 1,000 years, based on the dating of paintings on cave walls and shelters from this period.[2] A clear rock painting in Ginga Wardelirrhmeng, on the northern edge of the Arnhem Land plateau, from the freshwater period[3] (that was begun 1500 years ago)[4] shows a didgeridoo player and two songmen participating in an Ubarr Ceremony.[5]
A modern didgeridoo is usually cylindrical or conical, and can measure anywhere from 1 to 3 m (3 to 10 ft) long. Most are around 1.2 m (4 ft) long. Generally, the longer the instrument, the lower its pitch or key. However, flared instruments play a higher pitch than unflared instruments of the same length.
David Hudson demonstrates how to play this wonderful instrument in various ways. It is an excellent tutorial on Didgeridoo playing.(see You Tube)


The Didgeridoo is a traditional instrument of the Aboriginal people from Arnhem Land in Northern Australia. It was originally known as a Yirdaki in the traditional language.. 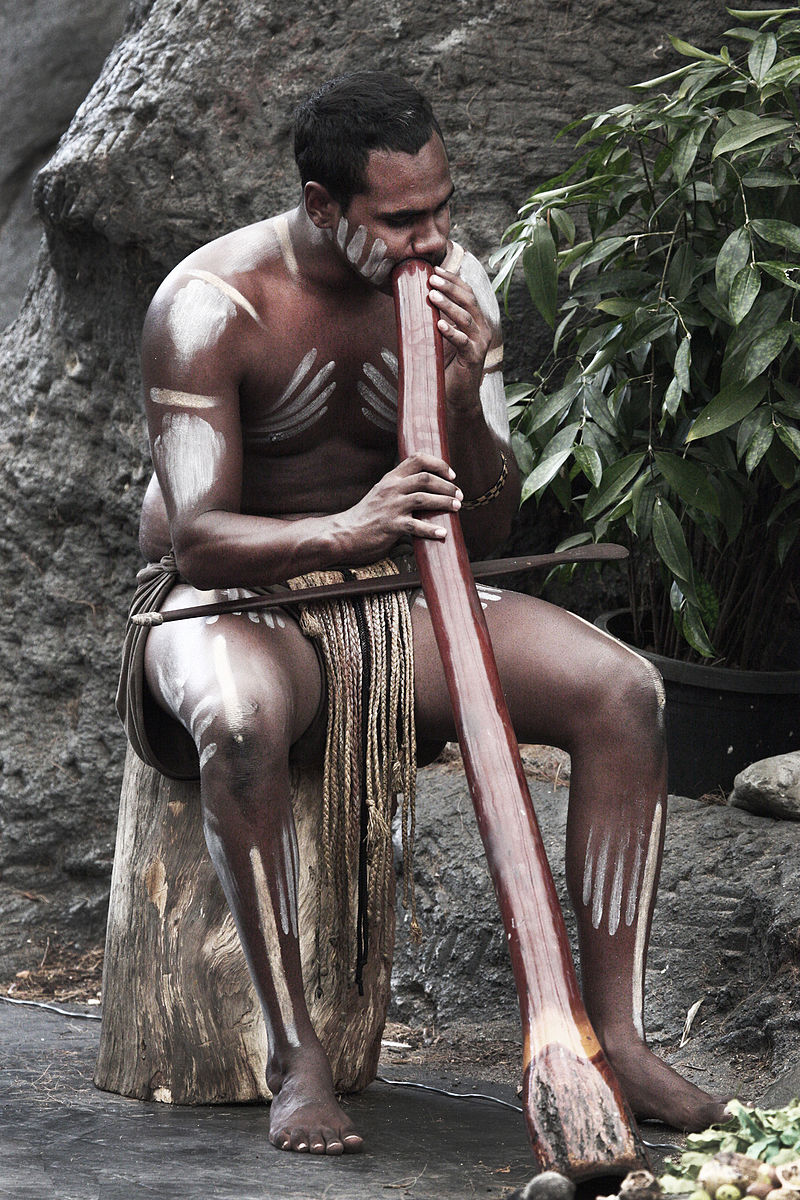 An uncle of my daughter's ex husband made my didgeridoo. In order to find the right material he went to the forest and tapped on some thin tree-trunks until he found one with a good hollow sound. He then cut the tree, blew the termites out of the hollow pipe, and prepared it for its final shape.

The first time I heard the sound of the digeridoo, I got goose-pimples and was highly impressed by its deep sounds. I love the way  animal sounds are imitated.

With thanks to Denise Nesbitt, who created the ABC meme.For more interesting ABC posts click on the logo in the sidebar . This week we are looking for words beginning with D

Wow, yoou have a didgeridoo! A fantastic instrument...
Greetings from Germany

Absolutely fascinating.
It has such a eerie and soulful sound.

It would be so much fun to try to blow into it. I'm sure it's not an easy instrument to play.

I am fascinated with acquiring new knowledge.

Very interesting!
I try to learn something new every day, keeps the brain alive.
Thanks!

You have some stories to tell, Wil! When natives make a flute, I never can get any sound out, lol. This is a beautifully carved flute, and a very interesting D-word.

Most unusual post for the letter D ever! I love the sound the didgeridoo makes. A relative has one also.

Love the didgeridoo almost as much as the Scottish (or any other) bagpipes. Same effect - goose pimples....

The name itself is so sonorous. I have never seen one but hearing it here It is quite interesting.
Thanks for sharing!

Didgeridoo
I love the name of the instrument
BTW do you play that instrument too?

went to a sanctuary in Australia and saw them blow this,

went to a sanctuary on Australia and saw they play.

Looks very difficult to play but it's a fascinating instrument. I brought back a boomerang from Aus but not a Didgeridoo. Nice one for the letter D.

The word (name) of that musical instrument has always made me smile when I've read about it. And you have your own! I'm so impressed. It was very interesting to read how it is made (the termites). I am going to do a Google search to hear what one sounds like.