Do you remember that I showed some cartoons by Heath Robinson (31 May 1872 – 13 September 1944) last year September ? I got several comments mentioning an American cartoonist, whose devices where just like those of Heath Robinson : complicated and too difficult to do simple jobs. His name entered the dictionary expressing that a device is impractical. The same happened with Rube Goldberg. 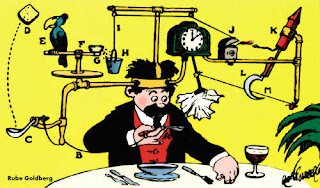 "A Rube Goldberg machine, contraption, invention, device, or apparatus is a deliberately over-engineered or overdone machine that performs a very simple task in a very complex fashion, usually including a chain reaction. The expression is named after American cartoonist and inventor Rube Goldberg (1883–1970).
Over the years, the expression has expanded to mean any confusing or complicated system. For example, news headlines include "Is Rep. Bill Thomas the Rube Goldberg of Legislative Reform?"and "Retirement 'insurance' as a Rube Goldberg machine".

With thanks to Denise Nesbitt,  who created ABC, and Roger, who took over from her. For more interesting ABC posts click on the logo in the sidebar. This week we are looking for words beginning with R

Great subject of the day, Wil

I LOVE Rube Goldberg devices. Such imagination and skill to do so little!

Great choice for R, Wil, - don't we all get carried away sometimes!!! Probably not as extravagantly as Rube Goldberg..

I definitely remember the other post and think I was one who commented about how Heath Robinson reminded me of him. I remember googling heath Robinson too.

Smiling all around. (although I don't agree with whatever right-wing politician made that comment about health insurance, but I certainly know what he thinks about it from the reference and that's the point here of course.)

Rube Goldberg inventions are hilarious! It is amazing to see what people devise!! Thanks for your post!

I've never heard of him - but you certainly had an informative post about him. Thanks!

The least I can say he had a lot of imagination !

I love it Wil. The kids and I built Goldberg's machines many times with Zunga pieces and Carrom board counters and nothing else that could stand. It's absolute fun.

Sounds and looks like a zany inventor!
Another informative and most interesting story Wil,
Thanks for sharing it with us,
Best wishes,

I loved those little films. I'd never heard of him but always enjoy seeing things like that in action. I suppose the nearest equivalent today is Wallace's inventions in the Wallace and Gromit films by Aardman Animation.

I have never been able to complete a rubik cube from when it started. Have you?

Wow what talent he has, enjoy watching.

Thank you for sharing.

Thanks for that explanation. Interesting.

Rube Goldberg would have definitely been someone I would've loved to have dinner with.
The View from the Top of the Ladder

Thanks for telling that it is not just me that is having the problem with blogger. I have made some very good and old friends including you and I will be very sad if I can't connect anymore.

We have too much rain, and the Capital Wellington if flooded. Is your daughter's place ok?