Our World Tuesday, ABC Wednesday, I for International Women's Day 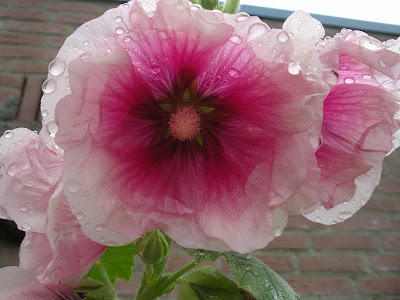 On 8th March we celebrate International Women's Day by supporting those women who are
living in very difficult  circumstances all over the world.
I wrote about IWD some years ago. Here's a comment I got then from a Greek man:
In Greece women feel like going out on March 8 with their girlfriends, no husbands or boyfriends. They eat, drink and dance till the early morning hours. In my country women are treated as equal to men. They're in politics, they're fire fighters, they're everywhere. But I can't understand why they need to celebrate so much on March 8 with just girlfriends! I guess I'll never understand women!

My answer then:
Thanks for your comment.Women celebrate IWD because even if your country and mine might treat men and women as equal partners, there are many women who are considered to be inferior to men. In many African and Asian countries women don't get equal schooling, sometimes no education at all. The Taliban in Afghanistan forbids girls to go to school. They, don't get medical help, they are not allowed to work. This is so stupid, for women are half of the population of the world, they have the same talents, brains and potential powers as men. Even in my country we have to deal with religious groups who forbid women to vote, to work outside the house, to study more than only elementary education. In Africa women work hard they have to look after their husband and children, to walk miles to fetch water, to walk miles to go to market and sell products of their fields. We celebrate IWD because we support  women all over the world. It's not so long ago, that it was discussed if women had souls.In the women's concentration camp we noticed that it was normal for soldiers to beat women. And we felt it ourselves. One of our women didn't take it lying down and beat the soldier back.That was bad for her. The soldier was surprised and not used to that. Greece and many European countries are better but the fact that you say:" I don't understand women, because they have equal rights".. means that you have never realised, THAT THIS ALL HAPPENED BECAUSE WOMEN  HAVE FOUGHT FOR IT.
I now can add that if you don't understand women, you can't understand men either. When do humans see men and women as people, who are two equal parts of humanity, who have to work together , and therefore respect each other. Respect for women! That's what we miss..
Recently a young woman was raped in a bus by a group of men . Nobody helped her and she died.
Does it matter where this happened? No! It happened!! Some days later a six-year old girl was raped by a group of men and left on the streets more dead than alive. Does it matter where it happened? No! It happened!

See also: http://dutchcorner.blogspot.nl/ where Marja said exactly what we all feel and think.

Welcome to Our World Tuesday! This meme continues in memory of the work of Klaus Peter, whose "that's My World" brought people together from around the world every Monday to share the wonders therein--big and small.Please click on our new logo for "Our World Tuesday" in the sidebar.


We thank Denise Nesbitt, who created ABC, and we must thank Roger too for the weekly job to find  ten bloggers for each of the ABC Team members  to visit and to read their posts. For more interesting ABC posts click on the logo in the sidebar . This week we are looking for words    beginning with I.

Great post Will I had a little post as well. We are pretty lucky we can live in holland or NZ and feel safe. Thre is still so much change needed. Hoop alles is goed
groetjes

Extremely will said Wil. It is too easy to think all women are treated as we are when the truth is painfully different.
I had read where a woman who was raped was put to death by her family for shaming them. Many parts of the world treat their farm animals with more respect.
I salute the woman who try to make a difference .

Just found a post asking WHY IWD. I should link him to YOU!

I didn't realize it was International Women's Day until I saw Dina and your blog. You're right that there are so many countries where women have no rights. It's a horrible sad thing.

I love your beautiful flower with raindrops glistening on it. I hope someday all women in every country can shine through even after been rained upon.

A marvelous post for the day, Wil!! It is amazing that in this day and time that so many women are still treated badly -- cruelly in many cases! I, too, salute all those who speak up for the women of the world!

Oh I want to give you a hug for posting this Wil! You have so much knowledge of this issue (some of it learned in a way most of us can only read about). Thank you for posting your answer to the gentleman who was confused...it is good for us all to read and remember. I will definitely remember and use your words: "What does it matter where it happened. It happened."

Great post! I think it is high time for women around the world to be treated fairly and equally as men. It is hard to believe how badly women are treated. Thanks for sharing this post. Have a happy week!

Good show Wil. It is harrowing knowing how many women are degraded to 'convenience for men' status.

Well said!
Until women are paid the same as men, can walk the streets without fear, are not raped or abused, do not have to suffer subjugation or circumcision -- until then, we need a space for women. We need to remember the injustice of half of the world. Not just on 8 March, but every day.

I absolutely agree with you and still even in our oh so civilized countries women are still in minority in some professions. And if you go back to the roots we women are responsible of this situation because who raises the men first ??? The woman ! She gives her baby boy his education in childhood. And why still mothers use their daughters for household scores and not their sons ???
I raised my son to be able to do everything, including household and ironing !

Such an IMPORTANT post, Wil. I frequently talk to my female students about what it was like even when I was a young married woman - how I couldn't have a credit card without my husband's permission, etc. To young people today (in the western world at least) they have no concept of what women have struggled with for most of history. But we need to continue to fight for those women who live in countries where they are still considered "beneath" men. Have a great week,

Very profound Wil.
Thank you for posting this.
Respect for people, absolutely, whether they are men or women.

What a powerful post...and so important. Thank you!

It is shortsighted to believe that women should not celebrate on IWD. Our country has made many advances yet there's still room for improvement. Abuses against women worldwide need to be eradicated. Have you read "Half the sky?" Kate, Abc Team

Oh, Wil, you are so heartbreakingly right. Even in our enlightened countries, these things happen.
And we're not so enlightened, either. It wasn't until the 1980s that spousal rape became illegal in Canada. It should have been illegal long before that, but a woman was still, in many ways, considered to be her husband's property, to do with as he wished.
I love the photo of your daughter and granddaughter on your header. How quickly the little ones grow!
Love, K

Thank you for highlighting this important day! It's easy to forget how many women are still treated terribly - as the norm, not the exception - in so many places and societies. We are lucky but so many are not! Hoping for change too.

A most pertinent post, Wil,- we have reason to celebrate in countries who respect women, and reason to support those who are abused and disrespected in countries who have not yet reached that level of civilization where women are equal.

Even though I am no longer young, I remember women who came ahead of me to pave the way for being able to vote, have an education (mine, post-graduate degree), and to work in a place of my choice. I applaud those women still trying to spread our freedoms around the world.

we didn't really celebrate, but I remember NZ was the first country that gave women the vote.

thank you for your post - i agree with your thoughts here.. I was myself always treated as an equal to the boys in my family - i grew up in India ..but I could see for myself around me where this was not the case..and I think that we need IWD until things are all right in all corners of the world..


Internet is a Blessing

As usual, I am late but I am doing my best to catch up.
Rose, ABC Wednesday Team

Well said, Will! I wish more people knew about International Women's Day! Thank you for sharing this post!

A fine post, Wil. The plight of women, especially in third world countries, is a disgrace. But it's not limited to the third world. In my own country (the USA) women have made much progress but some religions and some cultural groups still treat them as second class citizens.