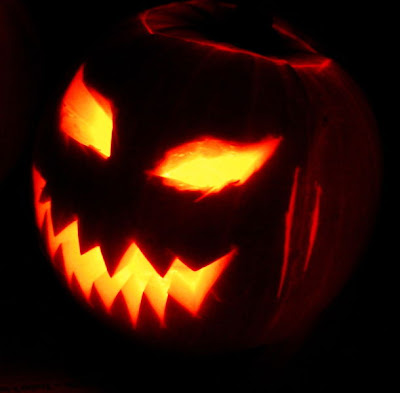 HAPPY HALLOWEEN! Pumpkins can be used for many purposes!
According to Wikipidia:"The word pumpkin originates from the word pepon , which is Greek for “large melon". The French adapted this word to pompon, which the British changed to pumpion and later American colonists changed that to the word we use today, "pumpkin". The origin of pumpkins is not definitively known, although they are thought to have originated in North America. The oldest evidence, pumpkin-related seeds dating between 7000 and 5500 BC, were found in Mexico. Pumpkins are a squash-like fruit that range in size from less than 1 pound (0.45 kilograms) to over 1,000 pounds (450 kilograms)" 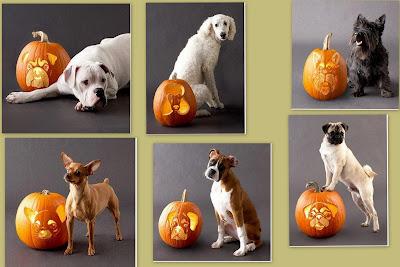 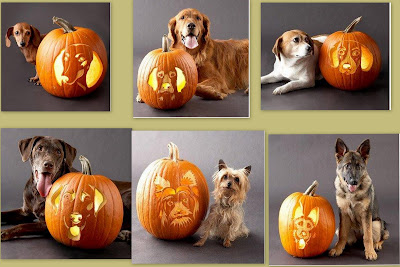 It is really worth while enlarging these photos !
Posted by Reader Wil at 10/28/2011

Great information, and I LOVE the dog portrait pumpkins! How wonderful! By the way, is that beautyberry on your header picture?

These are wonderful photos. I love pumpkins and all the lovely things that can be made from them. Great stuff!

Do you do Halloween in Holland. Here in NZ, it is getting popular with the young ones. I don't like the idea of ghost coming to my house.

I loved the puppies with pumpkins pictures! Really lovely.
Hope you are having better weather than the snow jut near us in New York.

Here in the San Francisco Bay Area, there is the Half Moon Bay Pumpkin Festival each year. The winning pumpkin this year weighed 1,704 pounds! (772.9 kg!)

And then there's the informal American pronunciation "punkin."