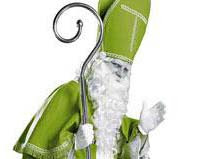 On the fifth of December we celebrate Saint Nicholas'Eve. That means we give and receive presents, accompanied with funny poems telling why you get this particular present. Traditionally one of the presents is a chocolate letter. Oxfam has campaigned against child labour. In the past these chocolate letters were made with the help of children, who worked on the cocoa plantations. This meant hard labour and making long days.Oxfam co-ordinates its work in developing countries with the Dutch government. Businesses support Oxfam via various projects in developing countries. And they've helped Verkade( a Dutch chocolate factory) to produce fair chocolate in the Netherlands. That means fair chocolate letters, child labour free.
Traditionally the Dutch St.Nicholas is dressed in a red bishop's habit and mitre, but the Oxfam St.Nicholas is wearing a green habit and mitre.

Oxfam Novib began as Novib in 1956, the first politically independent and non-religious development organisation in the Netherlands.

Foundation
After the 1953 floods the Netherlands received a lot of aid from abroad. Father Simon Jelsma and others wanted to return the favour. On March 1956 they founded the Netherlands Organisation for International Assistance (Novib) to help people in Third World countries. 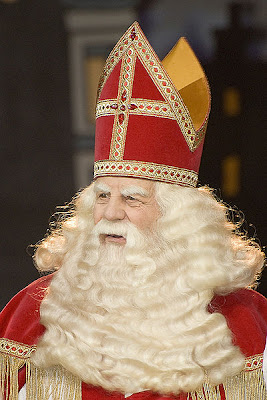 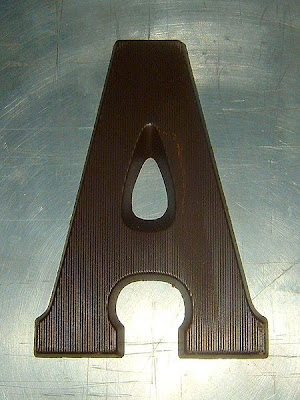 That's my World is hosted by Klaus, Sandy, Wren, Fishing Guy and Sylvia - a Team of experienced bloggers, whom we thank for this wonderful meme. You can see more of the world of other bloggers by clicking on the logo in the side bar or on that's My World

With thanks to Denise Nesbitt, who created ABC.For more interesting ABC posts click on the logo in the sidebar or Here. This week we are looking for words beginning with S.
Posted by Reader Wil at 11/22/2010

I really liked your header, Wil. I also liked your post for today. Thanks for coming over to my blog and leaving a comment.

I really like the idea of a poem to say why a particular gift was given. Puts thought back into gift giving. Think I will try that this year.
The green St. Nicholas certainly is much fitter than our roly poly Santa version.
As always, I learned today. Thanks.

Marvelous, interesting post as always, Wil! Like Patti, I love the idea of a poem to say why a gift was given. I, too, like the idea of putting some thought back into gift giving! And your green St. Nicholas is definitely fitter than our chubby St. Nick! And, as always, I do so enjoy your blog and the information you share with us each week! I hope your week is delightful!

Wow! This was such an interesting post, Wil. I loved seeing Sint Nicholas with wooden shoes.

The chocolate idea is certainly something I'd love although I feel sad for all the children who were used for child labor. Oxfam is one of the charities we support.

A fascinating post, thanks so much. I love your traditions and of making up a poem to fit the gift, and the chocolate letter, and also that there are organizations out there who take care of the world's children.

I loved reading this Wil. I always always learn so much when I visit you here. Blessings!

Time for me to polish my shoes so I can put them by my bed on the right day. Hope the grandchildren have started their Christmas baking so good ol' granny gets some goodies too.

I applaud the idea of stopping third world child labour but wonder whether not working takes the food out of their mouths.

Another year has passed, Reader, already we are talking again about St Nicholas. I cannot believe it. Where did the time go?

Wil, that was a nice little commentary about St Nicholas and the different traditions about the celebrations. Even though I don't join in the Christmas celebrations, it is always interesting to see where the traditions started and why.

I always buy chocolate letters for Christmas (imported here by a Dutch store), but I didn't think about the child labour in making them. I will make sure they are Verkade chocolates I buy this year. (I think I usually get Droste)

Interesting read and must say I loved your header too!! Does a green habit and mitre have any significance??

Great post Reader - it is nice to know that some thought has gone into a gift and that it has not just been bought willy nilly from a big store - especially nice when the present is hand made. St. Nicholas is often when the clergy celebrate Christmas with their families here, as Christmas day is devoted to other services.

Your St Nicholas header is lovely! I've never seen those chocolate letters, they look delicious - especially when they are fairtrade.

SUPER choice for this theme day!
Thanks for teaching me about this tradition here in Europe!
hugs
Léia

Enjoyed your post very much! very interesting.
S is for Santa

That is fascinating, I'd never heard of this tradition before. Great S post.

Hello, Wil -- I thought I had commented yesterday, but maybe I didn't. What an interesting post. December 5 seems so early, because I'm not used to it. You certainly have a great post for the letter S.
-- K

Our church sells fair trade chocolate, coffee once a month. An important issue and one that St. Nick might have gotten behind.

Oxfam is a wonderful organization and I am all for the fair trade on products.. I wasn't aware of the problem with the chocolates. I will be more mindful from now on. Thanks for sharing your traditions with us. That's what I like about Blogdom. I learn about our fascinating world.

An informative post. I especially enjoyed the history of the chocolate letter and the changes to child labor laws.

That sounds like a very nice cause. Good luck with the next celebration!

I miss it here and I also miss the chocolate letter. Sinterklaas dag is zo veel beter dan het kerstmannetje.

I tried, a long time ago, to put a little rhyme in a main present here for my British family in law on Christmas day because I love this tradition, but it fell flat on its face.

As usual so interesting and informative. Blogging really is so educational.

What a nice idea to write a funny poem to give with each gift. Novib sounds like a truly giving organization, one you can be proud of.

I love your new header - very appropriate for the season. I hear a lot about St. Nicholas as I used to teach at a Xian school that was founded on the Dutch Xian Reformed church. Wonderful post. :D

Thank you for commenting on my entry. I could learn things about St. Nicholas. it's a interesting post and thanks for sharing.

So do you hve Sant Claus too?

And, is he really jolly? Great post-informative and thought provoking. I also love the photo of 'St. Nicklaus'.

Me again - Thank you for the comment: The photo was shot from my terrace. We have a view of the approach to Bergen Airport :-)

Thank you for such a delightful, short history lesson. If we had to write a poem for each gift, I think our choices would be, for the most part, very different.

What a nice idea giving gifts on the 5th. of Dec. Afraid my poem wouldn't turn out too well. I've never been able to write a one.

Going to bake some pies after lunch today. I cheated and bought frozen pies, no standing for hours in the kitchen making my own dough and fillings. Tomorrow will be Thanksgiving Day here in the States. So we will be having the turkey (small one, I don't like a lot of left overs), green bean casserole, sweet potato casserole, dressing, celery and carrots sticks, hot rolls, and two kinds of pie, pumpkin and very berry blackberry, served with whip cream.

Have a great week-end.

gone to the dogs said...

Thank you for sharing this wonderful tradition. It puts gift keeping in a more thoughtful light.

Visitng from ABC Wednesday.
I love the Santa image you're currently using for your header!