My sincere apologies for the  bad quality of the photos. 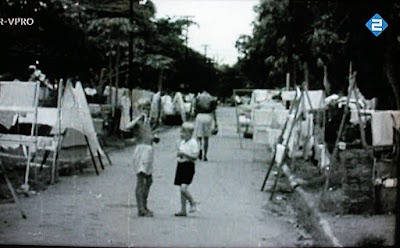 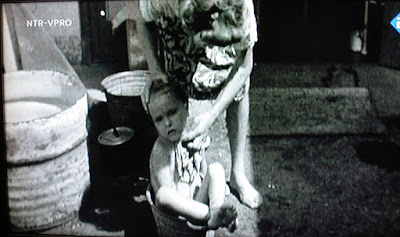 After our time as  p.o.w.'s in Japanese concentrationcamps, we were liberated by the British. Two months after the bombs on Hiroshima and Nagasaki we could escape a new danger. The Indonesian freedom fighters wanted to put us back in the camps, and kill us if possible. Fortunately we could sail to Singapore on British ships. There we waited for a ship to take us homeward, to the Netherlands.

On the fifth of December 1945 we went on board of the S.S.Nieuw Amsterdam , which was one of the five biggest ships of the world at that time. Four thousand Dutch men, women and children came on board. We also had a lot of British soldiers of the 14th regiment, who were longing to be reunited with their loved ones after their captivity in concentrationcamps.  On 8th December we left the harbour of Singapore. 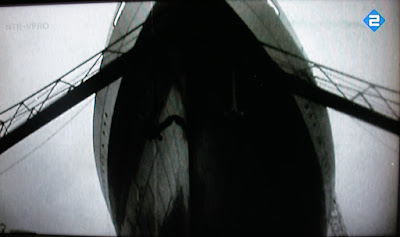 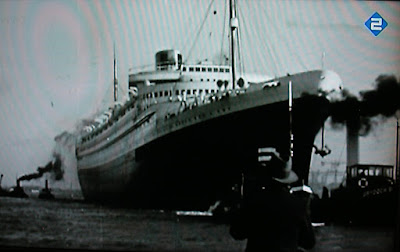 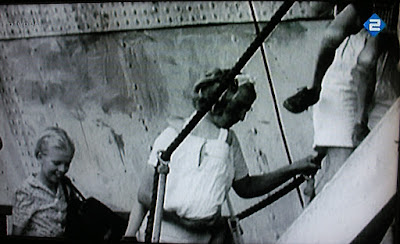 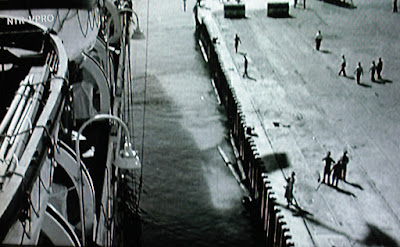 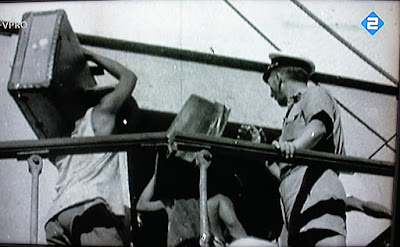 The ship was overcrowded, but we were used to that. There was, however an unexpected epidemic, of the measles, of which many children died, something my mum, sisters and I nor any of our fellow cabin passengers knew until now. It was so tragic because our mothers had done everything they could to keep their children alive in the camps, and here almost back home, some of them died. 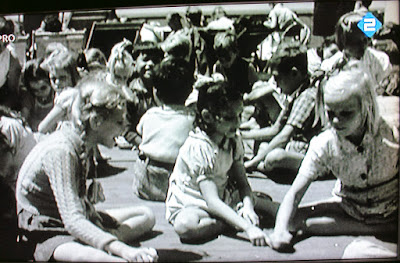 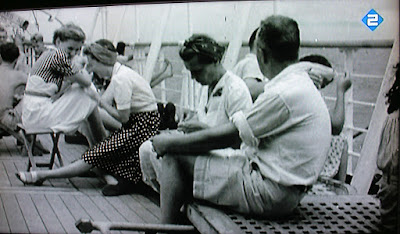 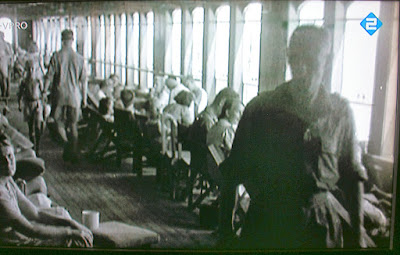 I enjoyed this voyage immensely. I could walk wherever I wanted. I watched the sea. Sometines I saw dolphins or "Flying" fish. Once I saw beautifully coloured jellyfish, also known as the Portuguese man-of-war.

During this voyage we had a stop in Adabaya, where we got on a train that took us to Ataka, where we got our winter outfit. We were treated to coffee, tea, limonade and all kind of cakes. For the children there was a play ground and each child got a present. It was for us a great happening.

When we returned it was dark. We saw in the distance the enormous, illuminated Nieuw Amsterdam, lying in all her majesty, our ship! 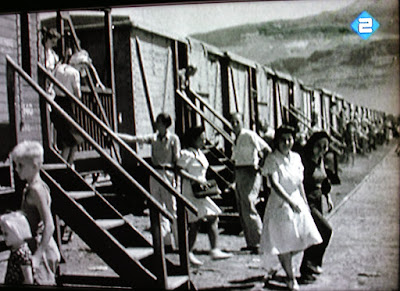 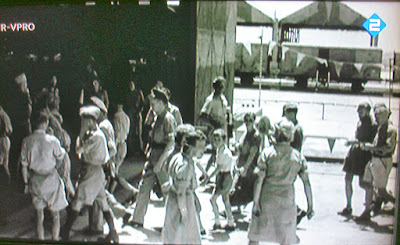 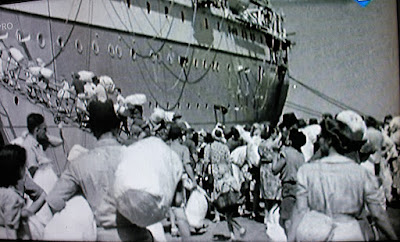 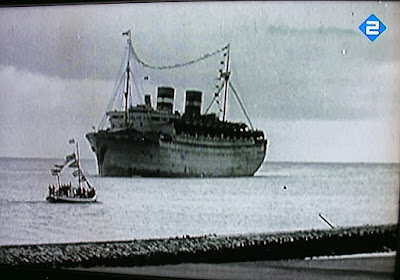 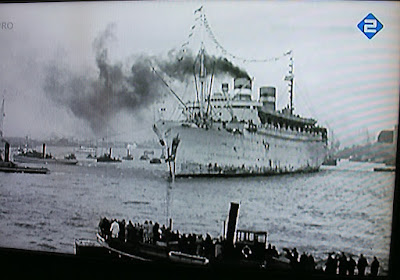 Slowly we steamed through  the Suez Canal. I watched a camel rider on the shore, who kept pace with us! 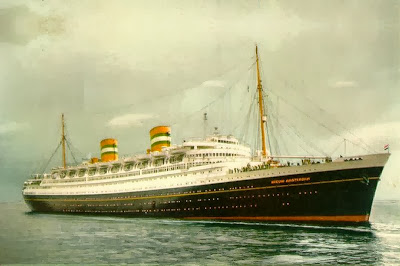 When we arrived in Southampton we had to leave our ship, which had been our home for 23 days. It was NewYear's day 1946. We had to board a British boat : the Almanzora. An old vessel and extremely cold! On 3rd January we arrived in Amsterdam, where Princess Juliana welcomed us. She was shocked by the silent group of women, who bowed for her like we had to do for the Japanese soldiers.

My mum , sisters and I went by train to Rotterdam, where my father was reunited with us after four years. He had been at sea during the war.


With thanks to Denise Nesbitt,  who created ABC, and Roger, who took over from her. For more interesting ABC posts click on the logo in the sidebar. This week we are looking for words beginning with N.

Welcome to Our World Tuesday! This meme continues in memory of the work of Klaus Peter, whose "that's My World" brought people together from around the world every Monday to share the wonders therein--big and small.Please click on our  logo for "Our World Tuesday" in the sidebar. Thank you Team of O. W. T.!

Wil, I am always stunned when you recount your time in the camp. How awful that those women and children died of a disease like measles after surviving such trials. I am so glad you and your family were spared and what a blessing the British were.
This was a part of history and a horror of war I knew nothing about till I started following you. Thank you for being willing to share such a hard time. Your family and those many others were women of pure courage.

You lived through such devastating times, Wil! For so many of us it almost seemed like a movie because at that young age here in the states it was almost impossible to realize that for so many it was reality!! Thank you for sharing the wonderful photos and history today! Such an incredible post for the day!!

I was not born until after the war, but heard lots about it in school. I cannot imagine living through such times. A wonderful post Wil,

What a privlege to know you, dear friend!

A most interesting and poignant post, Wil - one of my dear friends was also in a Japanese war prison for a number of years and lost some of her family at that time. I have always had the deepest concern for people, especially children, who suffered through those years, and I am so glad you made it through and were reunited with your father.

An amazing story, Wil. I will never understand why people go to war.

So glad your family made it safely back home. Can only imagine some of the things your family went through.

What an amazing story and photos. I am so glad you and your family made it home. Thanks for sharing! Enjoy your week ahead!

My uncle was in a Japanese camp and although returned to England he suffered many ill effects and died a young man. First hand experiences of that time are becoming less and less. It is good to hear your story so we cannot forget all those who suffered.

Wow! Powerful historical post and amazing photos ~ what a treasure ~ thanks and blessings to you, carol
(A Creative Harbor)

I watched a repeat of Tenko in the nineties, Wil, which was made in the hot summer of 1976 and filmed on a beach in Dorset where I live. I was horror struck by the treatment of pow by the Japanese.
Please post more of your past. The past is far to fast forgotten.

My goodness, that's extraordinary stuff. The measles must have been heartbreaking after surviving so much

What an amazing story. Thank you for sharing your personal experiences.
An Arkie's Musings

Wil, thank you for sharing this poignant time in your life.
I can not imagine what it mst have been like.
I appreciated seeing all the photos of the time too.

An amazing journey, Wil, and I am so sorry some of the children died, but I'm very pleased you survived, because you are a wonderful example to all of us. When you have been through something like that, everything else must seem easy. I know it certainly makes me look at life differently, just reading your story.
I have tears in my eyes right now. I am so grateful to know you, and hope we may meet again soon.
Love, Kay

What an honor to glimpse this part of your life and that of the world at the time. Your photos are such great treasures. Thank you for sharing your story with us.

The journey must have seemed like a dream after the horror of the Japanese camp. How wonderful that your family made it home. The photographs are so interesting.
Joy - ABC Team

Wil your post gave me goosebumps.. War is something we've only read about. It's wonderful that all of you got home together.

what a heart-warming (if sometimes chilly) account of your early days - thanks for sharing it with us.

Powerful images!
Thanks for sharing your story
Lea

My DIL's father had been with his mother in these Japanese concentrationcamps, as a child for two years. I don't know the whole story but it must have been terrible. Maybe they were on the same ship as you.

A wonderful post Wil about the horrors of war..

Very interesting footage, Wil! And all the pics you still had or could get a hold of!
Our family went 10 years later on the van Oldebarneveld(t?)

Oh Wil. I am so in awe of your story...I had picked up bits and pieces of it over the years of reading your blog but today your story has me in tears. I know some about what happened of course during the war (my father was in the US Navy during that time)and I got good grades in history and I read a lot and all that ... but to know someone close to my age who went through what you did is just heart-stopping. (I know I only know you through blogging, but I definitely feel as if we are virtual friends) . Thank you so much for sharing your story. It is important that we don't forget...

Check my blog, please! It's important!!! Thank you Wil!!!

Thank you Wil for your respond!!! We're fine, thank you! We are among people we love, family and friends. We redecorated our house the way we wanted because after three years of upsent we had to make some renovation! My daughter is now studen at the university! She managed to succeed at the examinations!!! She's going to be a journalist!!! That's what she wanted to be!!!
As for the girl, the police thinks that she's four years old, but she's so afraid she doesn't speak at all! Please post her picture at your blog! Maybe -because of her colors- she's from holland! You can read abour her at the first page of the British newspaper "Daily mirror" (http://www.mirror.co.uk/) Have a nice weekend!!!

This is so incredible, Wil. It's great that you've been able to chronicle the terrible times you and your family had to suffer through during the war. We keep wishing that wars would end if more people would make sure it wouldn't be forgotten... and yet... the horrors keep happening.

Wow, what an incredible journey! I am currently teaching English in Indonesia, so it is interesting to hear this story from the other perspective. So sad what you and so many others had to go through. The thought of those parents losing their children breaks my heart. Thank you for this post.